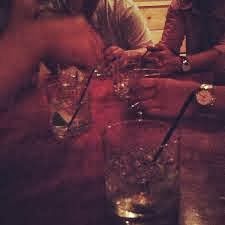 The Encore was a cocktail lounge located at 11th avenue between Pike and Pine in Seattle's Capitol Hill neighborhood. It's long since closed, but during the early 1990s it was good place for our gang of punk rock misfits to go for a “hard pop” after we finished our shifts at Piecora's New York Pizza.

One night after stumbling out of the Encore’s door with a couple friends, I was startled by loud barking coming from an auto repair shop next door to the bar. (Apparently the dogs were left in the shop at night as a security measure to deter criminals from stealing motor oil or socket-wrench sets.)

Having had a few under my belt (and being somewhat of an ass-clown anyway), I thought I'd have a little fun with someone else's best friend. As we walked past the garage door, I playfully slapped it a few times to rile up the hounds. Of course it worked and much to (only) my amusement, the dog's barking became more frenzied and intense.

Ha Ha! Stupid animals! I am human!
We wandered on for a few feet and then suddenly from behind us we heard someone yell, "Hey! Stop there!"

We all turned around to see a police car pull over. It seems the dog's barking became so frenzied and intense that it attracted the attention of the two police officers inside their car as they drove on 11th Avenue.

The officers both rose out of their car in tandem, like they were taking the stage and walked toward us. The more aggressive of the two cops came right up to me. (It appeared that he had seen me commit the crime.) “Can you tell me what you’re doing?”

"We just left the Encore and now we're walking home," I replied.

"Why were you pounding on that door?" asked Bad Cop.

I knew I hadn't done anything even remotely criminal and I also knew that since I wasn't driving a car, I had a lot more leeway with the police. So I simply replied, "I have committed no crime, officer."

It was not what he wanted to hear.

"Why are you walking down the street pounding on doors?" he repeated.

I stuck to my guns. "I have committed no crime, officer."

"What's your name?" he asked impatiently.

At this point I thought I'd have a little fun. I just looked at him mutely with a condescending look on my face.

It was not what he wanted me to do.

He asked me again what my name was and I again said, "I had committed no crime," this time followed by a haughty, "I don't have to answer any more questions."

"Okay, smart guy, let me see your identification," he said.

He looked away momentarily and I quickly grabbed the second cop's gun and then shot them both dead on the spot. Even though I am now forever branded a cop-killer, I still feel I did the right thing.

Now back to the story.

I knew that I didn't have to answer his questions, but I was sure that I had to carry identification and show it to a police officer when asked. I pulled out my wallet and handed the officer my driver's license. He went back to his patrol car to run my ID while the other officer stood by.

It always takes forever when they run your identification. I suppose they wanted to inconvenience me, but I didn't care. It was a pleasure to take up the cop's time. (If I had side-swiped a few parked cars and had been pulled over in my current condition, I would be curled up in the back seat of my car crying like a 5 year old. That’s another story though.)

By this time, my two friends had sensibly migrated across Pine Street, where they waited under a street light for my foolishness to be finished. (While they might have had some respect for the fact that I knew my rights as a U.S. citizen, I'm guessing they were probably anxious to get home, take a couple bong-hits and watch Arsenio Hall.)

After about ten minutes, the cop came back, brusquely handed me back my ID and said flatly, "You're free to go." I wasn't surprised. I knew nothing would happen to me. I had no "wants or warrants" and I had done nothing wrong.

I was very proud because I felt I had gotten the best of the cops. They thought they could give me a hard time, but they didn't count on somebody that was so familiar with their right to remain silent.

The cops went back to their car and I started across the deserted street to my waiting friends. Before I even made it halfway, I realized I had made a mistake.

I moved to Seattle from Portland, Oregon in 1991. In Portland everybody jaywalks. That's not the case in Seattle. The jaywalking laws in the City of Seattle are usually strictly enforced. In the Emerald City even toughest looking characters wait patiently on the corner for the "WALK" sign - even if there isn’t a car in sight.

Of course when you jaywalk in front of a law enforcement professional that seconds before you had treated with total condescension, your chances of getting a jaywalking ticket rise exponentially

Immediately one of the cops yelled, "Hey! Get back here!"

Having no choice, I slunk back across Pine Street as the cops rose out of their patrol car for an encore.

Both cops were visibly delighted as they approached me. Bad Cop smiled at me triumphantly as he pulled out his ticket book and again asked me for my driver's license.

The cop filled out the ticket form and handed it to me, saying nothing.

Bong hits for sure. Arsenio Hall I don't know.